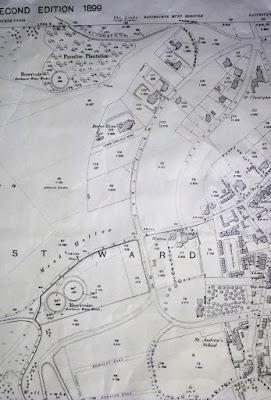 Everything can fall apart.

That happened to me last week after good friend of Who Is George Mills? Barry McAleenan took a trip, doing valuable legwork I simply cannot do from here in steamy Ocala, Florida.

So I attach a copy of 1899 with a selective enlargement for Warren Hill."

You can click on the entire 1899 map at the above left for the entire enlargement. What I'll focus on will be the devastating image in Barry's "selective enlargement" (which sounds exactly like an offer made in some unwanted spam e-mail I recently received).

At first glance, one finds that the image [below, right; click to enlarge] seems almost exactly like the 1930 map of Warren Hill School. In fact, it's similar as far as that entire property goes, showing only a difference in the northeast corner of the main building (A new isolation/sick wing spurred by the influenza epidemic?), a small addition to the low building in the SE, and a modified outbuilding to the northwest. All of these changes in the building are noted in the illustration, below left, with red arrows.

How disheartening for a hardworking Yank trying to 'virtually' figure out the campus, building, and neighbourhood from across the pond! 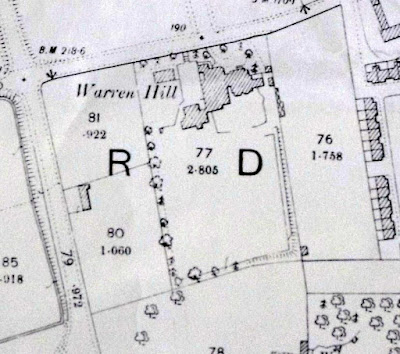 "There are three key photographic images in the provenance of our examination of Warren Hill School (1885 – 1936) in Meads, Eastbourne. All were very kindly provided by the Eastbourne Local History Society, and have been featured numerous times here.

In lieu of actual names, I've loosely considered those three the "post card image" (see it by clicking here), the "sepia image" (click here for that one), and the "B&W image" (seen by clicking here). Chronologically, it appeared to me that was the sequence in which the photographs had been taken—the post card early in the school's existence, the sepia-toned image in the 1890s and possibly 1900, and the black-and-white image much later, after an addition had been built.

That alleged order is immediately jumbled by Barry's 1899 map.

The low building I was certain must be the memorial library/reading room dedicated to those alumni who had lost their lives in the First World War was obviously fully constructed in 1899. Scratch that entire idea.

That would also make the "sepia image" the oldest of the three photographs, even if only by the length of time it might have taken to break ground on that new, low wing situated to the Southeast.

Secondly, on the 1899 map, there is no building directly across Beachy Head Road from Warren Hill. That means the structure presently there was constructed sometime between 1899 and the 1930 map. Consequently, the "post card" photograph was captured during that time frame as well.

But the post card shows a roof slanting down to the east from the eastern wall of the main building [shown in the final illustration, far below, left], and no such wall exists in the "sepia image"—simply a glass-walled and roofed conservatory/greenhouse. That could indicate an addition built there, and could be a locale for that library reading room. 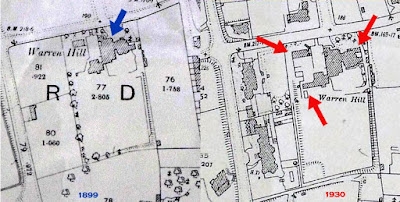 However, thirdly, my reconsideration of the three photographs forced me to notice another difference that had previously escaped my eye: there is a bank of tall, thin windows, possibly almost a bay of windows protruding, on the second floor at the most eastern part of the southern wall of the school. It's seen in the B&W image, just above the tree line. There had previously been separate, paired windows there.

Also, in that "B&W image," it's difficult to discern anything to the right, on the eastern wall, that could be the protruding roof indicating a two-story tall addition there to the east. That structure appears not to exist in this image.

This would seem to mean a couple of things. First, that the post card image, depicting the eastern addition, is actually the newest of the three, not the oldest—and now that I really look carefully, does that appear to be a tall electrical light standard at the main gate, and not the flag pole I assumed it to be?

As I considered it, Barry wrote: "The lamposts look like a corporation design for gas street-lighting. The third post (later moved) may be for electricity (using 4 insulators for three-phase and neutral) or possibly telephone lines." 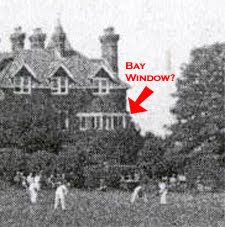 In addition, it appears that the new memorial library/reading room may have been added on the southern side of the second floor of the main building, adding a bay of windows with southern exposure to what must have been a remodeled library.


So much for my supposedly informed speculation!

One still wonders where the school garden that Bertram de Glanville describes would have been located. Were the glass-roofed greenhouses replaced, or simply roofed over and made sturdier?

And this completely blows up the idea that the building across the street from the school was any sort of long-time master's residence for the school—it wasn't there in 1899, and doesn't appear on the 1901 census. That residence was either elsewhere in Eastbourne, didn't come to be until after 1901, or was simply a myth.

There's only one thing that I simply don't seem to be able to resolve in my own mind: Why does the postcard image appear to show a building with a relatively flat façade in the north, along Beachy Head Road, while both maps clearly show a rounded protrusion jutting out, northward, from that wall [shown with the blue arrow in the 1899 image far above, left, to the left]?

Is it possible some of that main building to the west was demolished after 1930? Looking at the postcard image, the building across the street seems to be quite ivy-covered, and it apparently did not yet exist in 1901. Is that almost 30 years growth of ivy in Sussex [below]? 20 years? 10? How quickly will ivy creep up a wall along the Channel coast? 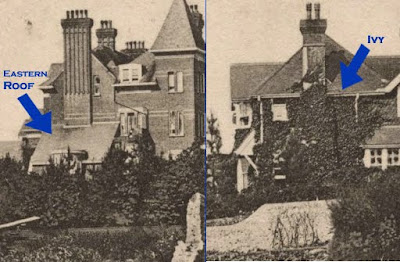 Could the post card be of such recent vintage that part of Warren Hill has been razed—a good reason for Joshua Goodland to have wanted to part with the school at the time! Might this post card have been produced by de Glanville to boost enrollment, using a quaint sepia image to hearken back visually to the school's halcyon days?

My, would I love to know if there's a dated post mark stamped on the other side of that post card!

The ubiquitous Mr. McAleenan notes: "It's entirely possible that aspects [of Warren Hill] would have been remodeled or demolished when changes to the layout were made."

Demolished. Just like my much of my metaphorical Jenga puzzle here...

Well, once again, I am beholden to the industrious Barry Mc for his assistance in my research and for punching larger, quite noticeable holes in my less-well-thought-out suppositions, allowing the light to shine in.

Thanks again, Barry, and if anyone else has any information, maps, images, ideas, or recollections about Warren Hill School, please let me know!