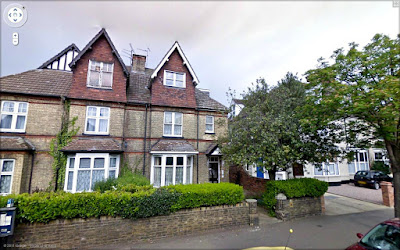 Friend of this website, Joanna Healing, recently checked in here with this brief recollection:

Although Joanna did not know Joan as well, many people must have known of Miss E. J. Warwick, and to a great many of them she must have been a hero. (By the way, who decided that "heroine" was no longer a word one uses?) Edith Joan Warwick was born on 13 June 1898 in Peterborough, where she lived at 103 Park Road [pictured, left], and passed away in Devon in September 1973, presumably in Budleigh Salterton where she lived with her brother, Guy. 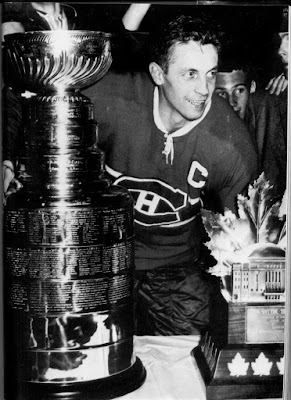 Our association here with Joan is via the sport of croquet, in which she was a renowned figure. Warwick won the Women's Championship of the Croquet Association in 1960, 1962, 1965, 1966, and 1968. She lost in the final to talented Isobel Roe in 1961 amid that stunning run of success.

Remarkable! As a North American sports fan, the only similar run of success in my lifetime was that of ice hockey's Montreal Canadiens in the 1960s. Les Habitants, as they were known, won Stanley Cup titles under their legendary captain Jean Beliveau in 1965, 1966, 1968, 1969, and 1971.

Still, when the aging Beliveau had an off-night on the ice, his teammates could and would pick up the slack. Warwick had no such help on the lawns while making her run at those championships. There were other all-time great stretches of success by hockey teams—especially by those "Habs"—and there were other magnificent, year-after-year performances in the sport of croquet as well. However, the string of titles won by both those Canadiens teams and Joan Warwick would be crowned a sporting "dynasty" by rabid fans on this side of the pond!

Oddly, croquet was not even her sport of choice! Of her early life, we know little. She can be found in the 1901 UK census at the age of 2, but is not at home. She and her 32-year-old mother, Clara E. Warwick, were visiting the home of Mrs. Lily Bennett in "Burley-in-Whfdle," Yorkshire, where Mrs. Bennett lived at Glendair on Station Road with 2 sons, a daughter, and 2 servants. Mr. Bennett was not at home.

The record shows that both Clara and Joan Warwick were born in "Northhants Peterboro," and that in 1901, Clara was already a widow with a daughter in tow, and a son, James Guy Warwick, presumably at school. Guy, however, does not appear on the 1901 census, although in 1911's census, we find him at 16 living in a household in Erpingham, Norfolk, where he may have been working with an architect as an assistant while learning the profession.

In 1911, Joan was still residing in Peterborough at the age of 12 with her mother.


After that, there is an informational gap, but she does begin to crop up once again by 1927. In that year, Joan appears on the ship's manifest [left] of the Mooltan, a steam ship arriving in London on 9 September 1927.

Sailing from Sydney, Australia, and using the moniker "Miss E. J. Warwick," the listing shows her address as being "103 Park Road, Peterborough," fixes her at 29 years of age, and describes her occupation as "Home Duties." 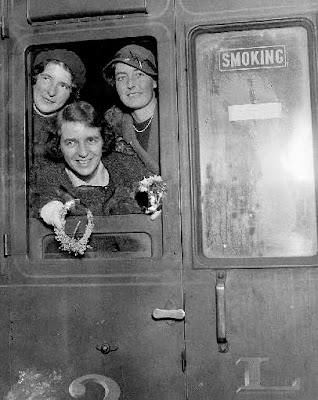 That seems a very odd choice for Joan to have made for her occupation, and I would wager that most other women sporting the tag "home duties" were not engaged regularly in the nearly same activities as Joan! But more on that 1927 voyage a bit later.

We next find her asea in 1934, this time steaming into London (Tilbury) on 20th December aboard the S.S. Orford, bound from Brisbane. The manifest, however, indicates "Miss E. J. Warwick" boarded at Port Said, Egypt. She was then 36 years of age, still at the same Peterborough address, and still engaged in the same occupation:
"HOME DUTIES."


But Joan crops up elsewhere in the historical record in 1934. At right, you see a photograph of three women smiling from aboard a departing train. The news service blurb to be run in newspapers with the image states:


It's no secret to regular readers of Who Is George Mills? that Warwick was a world-class hockey player in her youth, and this photograph corroborates that—as well as the reason for her 1934 trip to Egypt. 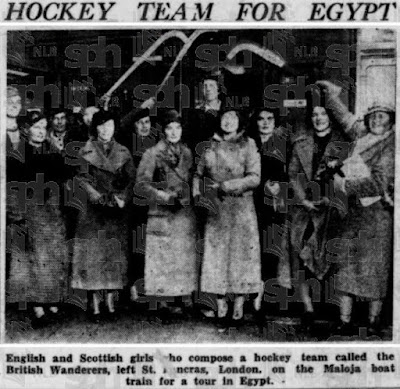 Even The Straits Times of Singapore, in their edition dated 16 December 1934, also ran a photograph of Warwick and her team, the British Wanderers, as seen, left. The team and its captain were apparently world-wide news, belying her own claim that she was merely a practitioner of "home duties," unless one counts often skillfully wielding a hockey stick against malicious opponents on a muddy field as simply a part of one's duty in the home.

At some point soon after this, however, Joan must have retired from taking the field herself, but maintained her strong link to the women's sport.

It's quite odd for me here to have so many images from an era to help tell a story—I'm usually scrambling to find something to illustrate each entry—but this time we just move to the next newspaper image, and so, too, into the next stage of Joan's life!

Below, right, find a photograph that ran at the top of page 3 of the Sydney Morning Herald on Tuesday, 26 July 1938. We find Joan below the equator once again, and the caption reads:

Miss Joan Warwick (manager) and Miss M. M. Knott (captain) of the All-England women's hockey team, which arrived in Sydney yesterday after a successful tour of New Zealand. Miss Warwick was in Australia with the 1927 team, and Miss Knott is one of the most famous of England's captains, a position she has held for eight years. 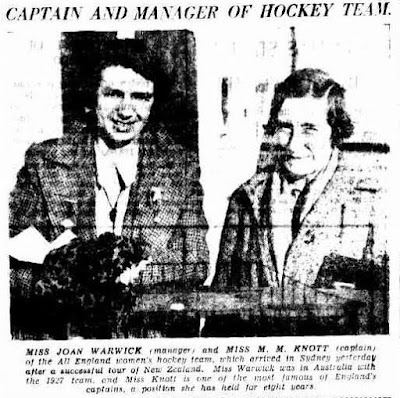 From this we can gather that, in 1927, Warwick had traveled with the All-England team, not the Wanderers, to the South Seas. It seems remarkable that, short of having been someone of privilege like Lady Dorothy Mills, author, traveler, explorer, and once sister-in-law of George Mills, these women had the opportunity to see so much of the world. So for Joan, the daughter of a Peterborough auctioneer who left a young widow to raise two very young children, living such a life virtually must have been a dream come true, and at the very least, it must have made for some amazing scrap-books and memorabilia!

For now, we'll leave Joan along with Miss M. M. Knott disembarking at Sydney after sailing in from New Zealand. Next time we'll take a look at the 1938 tour of Australia, meet their hosts and few of the players, and hear from Joan herself about the trip.

We'll also follow her to Budleigh and look at her later-in-life athletic career in croquet.