How cool is this bit of "Millsness" that just arrived via Royal Mail from Leeds? 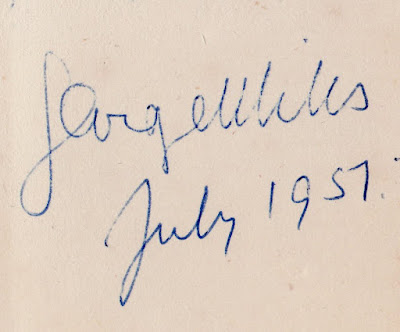 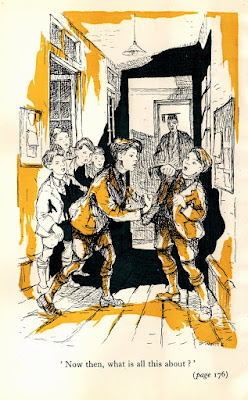 My greatly anticipated signature of George Mills arrived this afternoon with an entire book wrapped around it: Meredith and Co., published by the Oxford University Press, Amen House, E.C.4; Reprinted 1950.

It's simply a beautiful edition with gorgeous, creamy white pages and an illustrated dust jacket. The only illustration inside is a frontispiece printed on lovely, glossy paper. It's a pen-and-ink drawing, printed with a two-color separation, that's clearly signed "P. WHITE" and featuring an menacingly angry child [presumably "The Hawk"] looking very much like a young David Bowie, circa 1976, from The Man Who Fell to Earth.

I've read while surfing the web that 1933 first editions of this book have, at the very least, a cover illustration of Uggles, Pongo's beloved bulldog, by the famous illustrator C. E. Brock. I've never seen it, but would love to!

This edition's dust jacket, however, has oval-shaped exteriors of the fictional Leadham House. There's also a drawing of a boy on the spine that I'll quess is Muggs [Meredith], sans Co. The front cover's cameo is presumably the adventure in which three boys ratchet up a loose window and creep into the Master's Room to retrieve a sealed envelope filled with all of the sixth form's signatures, fingerprinted in their blood, swearing revenge on the often overly-severe Mr. Lloyd. Am I correct in assuming that when a book had been reprinted, acquiring the illustrations from a previous edition would have been a separate financial deal entirely—in this case a deal left unmade? 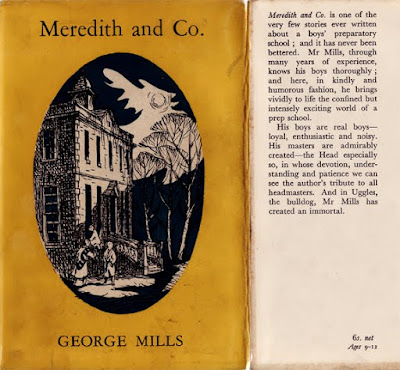 What made this edition special to me, however, was the author's signature, done with an extremely tired blue ball-point, on the first end paper. It's dated "July 1957". Now, I have no idea what month the undated Andrew Dakers Ltd. edition of Meredith and Co. was actually released and hit the booksellers' shelves, but everywhere I look, that year is recorded as 1957—everywhere except within the book itself, that is. My guess right now, though? It'd be in June or July of 1957.

Correct me if I'm wrong, but it seems to me that Mills was likely sitting at a promotional book signing soon after the release of the reprinted 1957 edition [then a distinguished 60 years old] when in must have strolled a long-time fan with a book—the copy that's right here next to me—asking to have his, although I guess I shouldn't be so quick to reject the fact that, even in 1957, it could have been her, older edition signed that day.

This Oxford University Press reprint is interesting. On the flyleaf, it lists the ages of potential readers as "Ages 9-12." Was it completely normal for a children's book, intended for a 9-year-old in 1950, to have 23 fewer illustrations than, say, the 1907 classic edition of Pride and Prejudice? 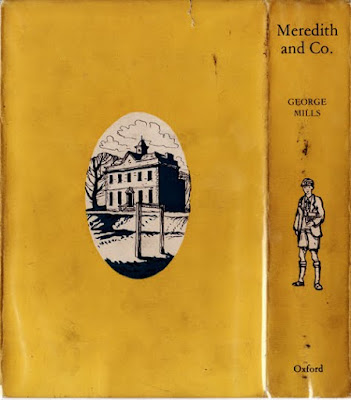 Meredith and Co.'s first edition in 1933, also published by O.U.P., is catalogued in the British Library and listed as containing "Plates". I won't assume they were all by the likely very expensive Brock, whose classic illustrations of the above-mentioned P&P proliferate to this day all over the internet, but it does imply more than simply a two-color frontispiece.

I've flipped through all of the 288 pages of this text and there's not an illustration to be found within. Does this reflect some post-WW II cost-cutting or simply a difference in children's publishing between 1933 and 1950? The former is my hunch, but the latter wouldn't surprise me given the changes the entire world had seen during those 17 often-bitter years.

Anyway, I'm simply delighted with this wonderful book that eerily smells so much like it was stored for years in a room full of freshly dried marijuana. Please take a moment to let me know if you have any insights into this edition, the illustrations [or lack thereof], the promotional book signings that must have taken place, or the climate of Great Britain in the early- to late-1950s, to provide me with some much-needed context.

Your input would, as always, be most welcome!