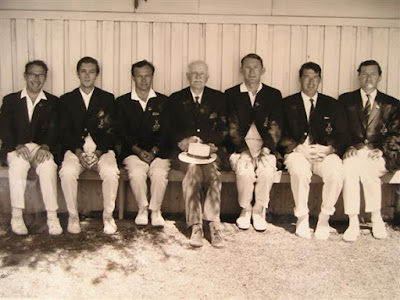 Yesterday afternoon I had the distinct pleasure of an interview with croquet icon Dr. William P. Ormerod. To hint that I conducted the interview would be misleading: Dr. Ormerod has a wealth of information, anecdotes, and memories, and he was kind enough to take me on a quick tour of a by-gone era in the game's past.

In fact, Ormerod [seen, far left, in the 1969 photograph at left], born in 1937 in Bristol, continued his family's position as the longest line of physicians in Britain's history, starting in 1789, the year of the French Revolution, and continuing for, I believe, seven generations.

Of his roots in the sport of croquet, the charming Dr. Ormerod recalls, "My first tournament was in 1952 when aged 15 years, and my first opponent was at Parkstone [against] a lady, Miss Hedges. She was in fact Lady Barbarolli's aunt, and when she knew that I was also musical and played the 'cello, she said 'William, don't let's play this silly game; we should go inside and talk about music!'" 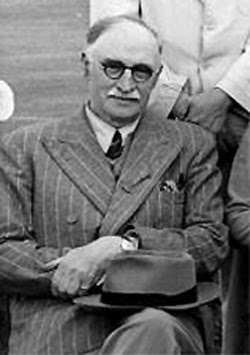 His initial involvement with the sport came at the suggestion of Kathleen Ault, a player of that era who was associated with croquet legend, author, and philanthropist Maurice Reckitt.

Ormerod recalls that Reckitt [right], as we know, was associated with the company Reckitt Colman, but the "directors paid him to stay away from the board meetings." He was a fine croquet player who first won a championship in 1935, and later wrote the text Croquet Today.

Reckitt was a noted Christian socialist, but also was known as a "champagne socialist," because of his belief that whether one won or lost at croquet, it was always best to follow play with champagne.

He and his wife, Aimee, loved dancing, an activity for which they were well known for some 40 years. Aimee was also an accomplished tennis player who had competed at Wimbledon in the 1920s, but Ormerod recalls that she played the 'cello as well. His recollection, however, is that she at last gave a recital during which something went awry, and she sadly never played in public again.


Dr. Ormerod also tells wonderful stories of some other noted personalities of the era.

He felt a kinship with Major Freddy Stone, a player who had begun playing at a young age as well, at 12 or 13 years old in 1912, and who "hit the ball like a bullet." Stone had a distinguished military career, but his most noteworthy service might have been in the British army's assistance during Turkey's Hakkari earthquake in 1930.

The Turks had been foes during the First World War, but afterwards the English provided such substantial help that Stone was told, "We will never fight against the British again!" 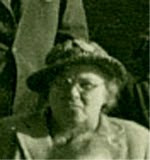 Of another player, legendary Daisy Lintern, who was also a noted manager of croquet tournaments, Ormerod recalls that, "as opposed to white, ladies at the time wore colorful silk dresses and hats to play."

Lintern apparently once had occasion to attend a funeral on the day of a match while wearing a hat festooned with flowers. Deciding her floral hat to be too much for the service, she quietly set it aside, out of sight. Much to her surprise, the casket was later brought out with the hat sitting on top, having been mistaken for a wreath!


Ormerod also has fond memories of Guy and Joan Warwick, with whom he stayed while in Budleigh Salterton, almost next door to the Mills siblings, George, Agnes, and Violet. His association with the Warwicks began even before Guy and Joan moved to Budleigh. 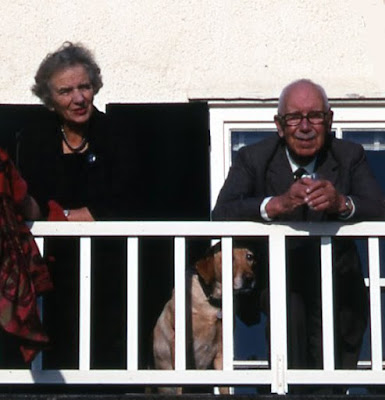 Brother and sister, the Warwicks [left] had lived, as we know, in a Victorian house in Peterborough, and while Dr. Ormerod was attending Cambridge in 1956, he would ride "from Cambridge to Peterborough by bus and play croquet all day long." During his time spent there, Guy, an architect, would drive Ormerod to Hunstanton, and "on the journey there, he would point out buildings he had designed, especially in the Georgian style."

Soon after that, the Warwicks had retired to Budleigh, which Dr. Ormerod recalls as being a "special" place: "When I was a boy Majors retired to Exmouth, Colonels to Sidmouth, and Brigadiers, Generals and Top Brass to Budleigh--all towns within 10 miles of each other !"

Joan Warwick was a noteworthy player of croquet, and Ormerod recollects her as powerful, and that while most women relied on some finesse, Joan was "not a very elegant player like some of the ladies, but she had a good eye for the ball," and consistently hit the ball quite hard!


Finally, of George, Agnes, and Violet Mills, Ormerod has a few memories.

He recalls the siblings were "well educated and had apparently come from a family that was well-connected," as well as having had enough money to live by their own means. He remembers visiting their home just once, when he was 19 years of age (it would have been 1956-1957), but has no real memories of the occasion.

Of Agnes [seated, right], Dr. Ormerod recalls that Aggie "was a great character," whose gait was unusual, waddling along with out-turned feet. (We've already been told that children in Budleigh were fascinated by Agnes's unusual appearance). He describes her as "very nice, highly educated... and very involved in croquet."

One other thing: Agnes apparently played with unusual equipment that apparently came from Burma!

Contrasted with her much larger sister, Violet Mills was "slim and ladylike, not as good a player as Agnes," but again, "a very nice person." 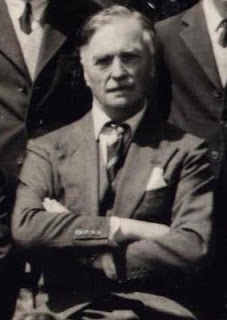 Of George Mills, Dr. Ormerod seems almost apologetic about his lack of remembrance. Aware today of Mills's status as a children's book author, he did not know then that Mills wrote, nor has he been able to find anyone else who knew that Mills had been a writer. "Even my mother did not, which surprises me," he explained, "as she was quite a literary person."

He recalls Mills [left] only as a player, but does remember that George had been "a smart, dapper chap, a great contrast to Aggie," the latter often having been rather careless about her appearance. It did not surprise Dr. Ormerod at all that George Mills had spent time at Harrow and Oxford, and he distinctly recalled that Mills had "an unclear voice, [and] a lisp."

Interestingly, when told that Lt.-Col. Gerald Cave of Budleigh had described George Mills as "exuberant," "loveable," and "enthusiastic," he replied, "Those are words I would use to describe Gerald Cave himself."


This past weekend Dr. Ormerod played croquet in the "Dorset Golf Croquet Champs. at Parkstone, where I played my first croquet tournament in 1952 aged 15 years." 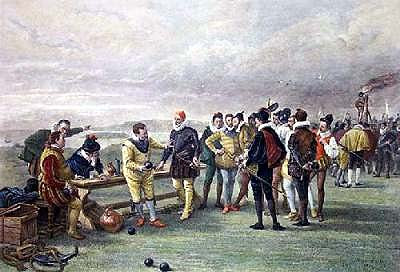 He continues: "Talking about croquet players in the 1950's and playing croquet at present brings a wry smile to my face; all the financial markets continue to plummet and major problems in middle east and horn of Africa. But Sir Francis Drake still played Bowls as the Spanish Armada approached Plymouth in 1588 !"


Ironically, as we spoke that evening, four cities in England, including London, had concluded a day of frightening rioting and looting, reminding me that times have certainly changed since the Mills siblings took to the lawns.


The croquet resume of Dr. William P. Ormerod is stellar, and it includes the fact that he played on the MacRobertson series winning team in 1956 when at Cambridge University, aged 19 years, as well as in 1963, 1969, and 1974. In addition, he won the Delves-Broughton Open Golf Croquet Doubles Championship in 1954 when aged 17 years, partnering Brigadier A.E. Stokes-Roberts at Roehampton. Ormerod was winner of the Open Doubles Championship seven times (in 1960 partnering H.O.Hicks, and in 1971/2 1975/6 and 1977/8, partnering G.N.Aspinall). He was also winner of the Parkstone Dorset Salver Open Croquet event on nine occasions between 1956 and 2010—a remarkable 54 years between winning it for the first and the latest time! 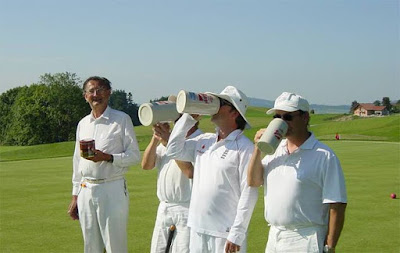 
Dr. Ormerod has played around the world. A more complete sketch of his career accomplishments in the sport of croquet can be found HERE. For his record in the database of the Croquet Association, between 1954 and 1984, click HERE.

It was great honor to have the opportunity to discuss the sport with the legendary Dr. Ormerod, and I am grateful for his kindness, his time, and his generosity.


[Update: Here's an update I received from Dr. Ormerod on Tuesday, August 23, 2011: "For the sake of accuracy here are just two further comments. It was Aggie Mills who had a marked lisp, not George(although he may have had one). Also I see you have mentioned Hakkari on the Turkey/Iran border as the site of the serious earthquake in 1930--certainly that was the site mentioned for 1930 quake in literature; however his comments re Turkey not fighting the British I well remember. This comment was also made by a patient of mine, Mr. Shillabeer, who served as a private under Major Freddie Stone and also helped at the earthquake. Mr Shillabeer died in the 1970's and was from Ermington, Devon, before moving to Parkstone in approx. 1968. (I was a GP in Parkstone 1965--1995 before retiring last year after 15 years as a government Tribunal Doctor working with the Judiciary)." Thank you once again, Dr. Ormerod, for your patience and your time. I remain extremely grateful for your kindness.]