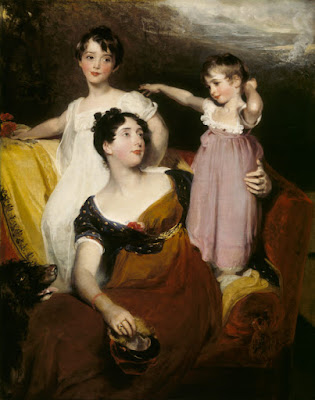 Over the next few entries, we'll be working to get a final few items on-line regarding the life, times, and family of George Mills.

Here is the article from page 257 of the August 1856 issue (Vol. 201) of The Gentleman's Magazine and Historical Review:

June 23, suddenly, at Hyde-park Gardens, London, the residence of Mr. and Mrs. Arthur Mills, aged 69, Lydia Elizabeth, wife of Sir Thomas Dyke Acland, Bart., M.P., of Killerton, Devonshire. The funeral of the late lamented Lady Acland took place on Saturday evening last, in the yard of the old family chapel of Columbjohn, and was attended in large numbers by the tenantry and their wives, by the poor, and by almost the whole neighbourhood. The scene was one of the most simple but affecting description, and the demeanour of all present evinced not only their reverence for the sacred rite then performing, but also their deep feeling for the departed, and her surviving relatives. The funeral was attended by Sir Thomas Acland and his four sons, by several grandchildren, by Lady Acland's nephews (sons of her brothers, Mr. George and Archdeacon Hoare) by Lord Carnarvon, Lord and Mr. Charles Courtenay, Right Hon. John Fortescue, Mr. Hoare of Luscombe, Mr. Blencowe, Mr. Jenkinson, Dr. Miller, and several other private friends. In the evening the procession started from the house, soon after six o'clock, and consisted of a hearse and four horses; mourning coaches with four horses each; three private carriages; and by some 300 or 400 of the tenantry on the estate. The Rev. J. Hellings, and the Rev. Appom officiated on the occasion. As a proof of the reverential feeling exhibited by the attendants, it may be stated that on the Lord's Prayer, in the funeral service, being commenced, everyone in the chapel-yard, amounting to several hundreds, immediately knelt, and continued in that posture till the whole was concluded. 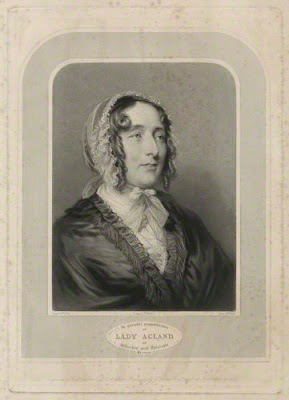 Lady Acland, pictured, right, in a posthumous mezzotint executed by Samuel Cousins after an 1848 portrait by painter Joseph Severn, was buried in the graveyard of the Columbjohn Chapel at Broad Clyst, Devon, England.

While George Mills never met Lady Acland—he was born exactly 40 years after her death—this obituary does indicate the connections his family would have had among the powerful Aclands. While his grandfather, Arthur Mills, was an in-law, George's father was blood, as were George, his half-brother, and his sisters.

And, as we don't know where George's body was interred (if, in fact, he was not cremated), we must consider the fcat that George's final resting place may be in there Columbjohn, not far from George last residence in Budleigh Salterton.

I have been unable to find and access records regarding those laid to rest within that burial ground.