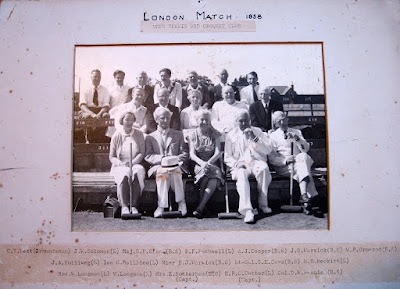 It appears as if it will be another scorcher here in Ocala, Florida, and to make it all the more fun, there is a tropical storm, Emily, "meandering" around Haiti, and we're watching its movements—or lack thereof.

I am happy to say that I've received a bit more ephemera from good friend of this site Joanna Healing in Budleigh Salterton. Above, Joanna sends a long a photograph [above] we'd once seen scanned from a book, but this time in its original form with typewritten information affixed. We can see that it is the 1958 "London Match" at the Budleigh Salterton Lawn Tennis and Croquet Club.

Joan Warwick died in the early 1970s. She and Guy (brother and sister) were extremely good at encouraging new croquet players. They were both excellent hosts to people who came to play in the tournaments. Guy was a “joker”.


Below, there is a photograph that Joanna describes only as "ancient," presumably of croquet players at the Budleigh Salterton club. 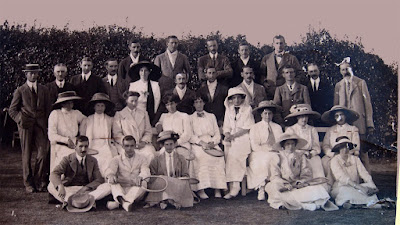 Thank you again, Joanna, and to everyone who has helped out here along the way. As always, your support and assistance are greatly appreciated!