My father retired, I think, in 1979. I remember asking him about something and he replied that he hadn't had time to think about it yet.

"I'll tell you," he replied, "I don't know how I ever squeezed in working full-time. It seems like I've more to do now then ever!"

That's basically how I feel just a few weeks into my summer. Time to write about George Mills? Not as much as I would have thought, and having my work e-mail shut down for a week for a system upgrading didn't help at all.

Long ago, it seems, we looked at phone numbers and addresses for the Mills family through 1925, the year of the wedding of George Mills and Vera Louise Beauclerk. It seemed a natural time to graze the British telephone directories for new listings involving George Mills. I knew he and Vera had gone to Portslade to work at Windlesham House School. I'd have expected to find him there.

Geoerge and Vera never crop up in Brighton or Portslade listings, but apparently did surface in the October 1926 London telephone directory—perfect timing, considering George had cut ties with Windlesham at the end of the Summer Term in 1926. 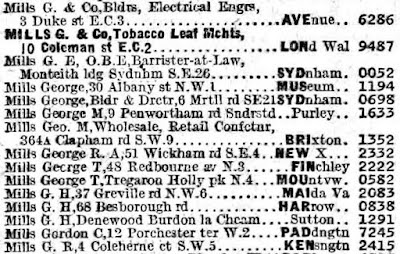 He had appeared at a time I would have expected, given how the events at Windlesham played out, but it was at an address I didn't expect. The 1926 listing reads: "Mills George R. A, 51 Wickham Rd. S.E. 4… New X… 2332." [And, as we know, George's full name is George Ramsay Acland Mills.]

Now, I found these London directory pages at ancestry.com, but their search engine always frustratingly teases you with only occasional dribs and drabs of specifically what you're looking for while often barraging you with completely unrelated references. It took awhile, but I eventually ferreted out listings for that same name, address, and phone number through the March 1929 book.

Thinking about the Mills time-line we know, George worked for some unspecified time at Warren Hill School in Meads, Eastbourne, after he and Windlesham separated in 1926. This address would seem to imply that George remained working on the southeastern coast through the end of the decade. the 51 Wickham Road address is a building housing multiple flats today, as it likely did then. 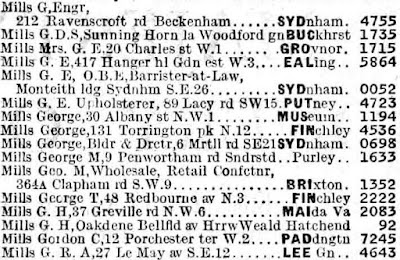 I speculated things must have been going well for the young couple, being able to both buy a home in Portslade and keep a flat in town. Of course, they may immediately sold the home in 1926. Still, it seemed a bit odd that their flat would have been in Lewisham, so far away from Kensington, where all of the kin on both sides of their families lived within a small radius.

We also know that by 1933, George had also taught in Windermere at The Craig School, and in Glion, Switzerland, at the mysterious English Preparatory School.

I wondered about that, but realized that Vera would probably not have been inclined to go north with him, or to Switzerland, and probably wanted to stay 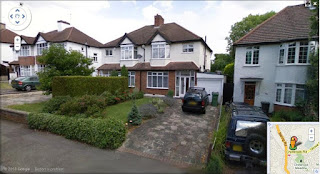 near her family. 27 Le May Avenue [right] in Lewisham is actually a pretty nice home today, and must have been then as well. Still, it struck me as quite odd that, if George had been living away from home in Windermere and Switzerland, why would Vera have wanted to be residing so far from Kensington?

Vera's mother had passed away in June of 1933, as had George's father in 1932. It wouldn't be surprising if George and Vera had come into some money during that span of time, and there also would have been additional income for the couple from the publication of his first book, Meredith and Co. in 1933.

Given the financial windfalls the couple likely would have experienced, it wasn't surprising for me to find yet another new listing for G. R. A. Mills in the November 1934 phone directory: "Mills, G. R. A, 24 Beadon rd,

Bromley….. RAVensbrn 0819." Using Google Maps to take a peek at 24 Beadon Road reveals a extremely fine-looking house to be moving into in the midst of the Great Depression. Not bad for a fellow who, at this time, would seem to have then found some employment as a schoolmaster at institution, seemingly lost in the mists of time, the Eaton Gate Preparatory School, London, S.W.1.

This would all seem to blow my theory about a struggling and often jobless George Mills during this time frame right out of the water! The only thing I wonder: With kin in Kensington and a job right there in Eaton Gate, why keep addresses—no matter how lovely—so far across the river in Lewisham and Bromley. Perhaps, I thought, real estate was much cheaper at the time if one purchased in the southeast of London, on the far side of the Thames.

That 24 Beadon Road listing in Bromley stays in the London telephone directory until the next watershed year in the career of George Mills: 1939. In that year, Mills publishes two books, Minor and Major as well as St. Thomas of Canterbury, after having published his second novel, King Willow, in 1938. 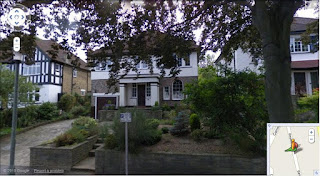 Predictably, with new finacial gain, that 24 Beadon Road listing disappears from the February 1939 London directory. That's not too surprising since G. R. A. Mills seems to change domiciles in tune with the major events of his life. No listing for a G. R. A. Mills replaces it, however.

Perhaps Mills had anticipated the war in a very pragmatic way. We know that George returned to the army in October 1939, becoming a paymaster in the Royal Army Pay Corps, and perhaps, knowing he planned to make that career move, he had already started to make arrangements for a change back to a career in the service of the Colours. No matter, that 24 Beadon Road listing stays out of the London directories for quite a while.

A listing for a Mrs. G. Mills soon shows up in the 1940 Exeter telephone directory: "Mills, Mrs. G, South Vw, 28 Exeter rd……..Crediton 112." Crediton is just a few miles outside of Exeter, where George could have been stationed as a paymaster at the FCO there. It would make sense: He had kin among the Aclands at Killerton and Broad Clyst.

Vera died in 1942, however, in Exmoor—again Acland land, only farther north—where there was also an FCO of the RAPC in nearby Taunton. There are no listings for any Mills, G. R. A., George, or Mrs. George, in Somerset around 1942. In fact, there are hardly any Acland listings there at that time.

By 1943, Mills relinquished his commission in the service due to "ill health." Where did he then go? A recent widower and presumably too ill to work, it would make sense for him to head to Kensington, and the care of his mother, Edith Mills, and his sisters, Agnes and Violet. 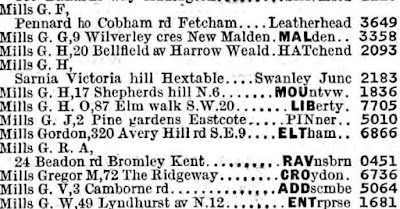 By 1948, the listing for G. R. A. Mills at 24 Beadon Road in Bromley returns to the London directory, this time sporting a barand-new telephone number "RAVensbrn 0451." Is Mills finally well again, and ready to resume his life in Bromley once more after so much time?

Again, there are very good reasons to think that 1948 is another key year in the life of George Mills, but that's something we'll get to next time.

Before I finish, here’s the caveat regarding all of this. While preparing to write this post, I happened to notice something I hadn't seen before.

There was a listing—a new London listing— I'd overlooked in the earlier 1926 London directory, the edition that had been published in April: "Newcross .. 2332 Mills, George Robert Alexander .. .. 51 Wickham rd S.E.4."

That 51 Wickham Road address apparently never did belong to George and Vera Mills. I'd been fooled by the fact that after one publication, George Robert Alexander had condensed his full name to G. R. A in subsequent editions of the London directory.

What of those other addresses? Have I simply tracked the upwardly-mobile movements of George Robert Alexander Mills through 1948, and not those of George Ramsay Acland Mills at all?

Is it sheer coincidence that key dates in the life of our George Ramsay Acland Mills always seemed to—somehow, through the ether—prompt someone named George Robert Alexander Mills to relocate as well?

Or is the coincidence simply that one of those listings coincidentally saw the permanent removal of the George Robert Alexander Mills listing at the same time George Ramsay Acland Mills began his own new listing?

It's odd: I can't find any other documentation in ancestry.com that a gentleman named George Robert Alexander Mills existed in the United Kingdom. No birth record, no marriage, no death certificate—nothing. The only reference I could squirrel out myself was that single, April 1926 London telephone listing providing his full name.

Next time we'll look at some other interesting listings in the London telephone directories between 1925 and 1948 that aren't in doubt and clearly aren't listings for any George Millses at all.

These listings would have had an impact on the life of our George Mills. In two days, I'm leaving for a 10-day holiday in Michigan to spend time with friends and family there.

If you don't hear from me by then, check back around the 14th of July!